Scope of this Guide[]

Having trouble understanding how signals work? This is the guide for you. This guide is for those who have already have a basic understanding of how to place rails, stations, depots, as well create trains and routes but need help making sense of signaling. If you don't know any of those things check out How to play: Your first train route.

Many of you are already somewhat familiar with some type of signals from your daily life such as traffic signals. However locomotive signaling operates somewhat differently than road vehicles. This guide will attempt to practically explain how signaling for railroads works in voxel tycoon.

What Do Signals Do?[]

Signals tell the locomotives where they can and cannot go, they tell which way trains can go on a track and allow for the train to find it's path to it's destination. They allow for intersections and help prevent collisions. Signals do this by dividing the railroad into sections called blocks.

Simply put, blocks are the spaces of connected rail in-between signals or the end of the track. The mechanics of the game do not allow multiple trains on one block under normal operating conditions. When you create a signal, blocks are now identified in the game by a colored line. Every piece of connected rail will make up that block indicated by the color of that block. So if you have a railroad with no signals you have a 1 block railroad, which means you can only have 1 train. Later on in the game you will have more blocks than you can count so don't worry too much about how many blocks you have. However it's prudent to remember you will always need more blocks than trains so they can move around.

Take the following example into consideration: 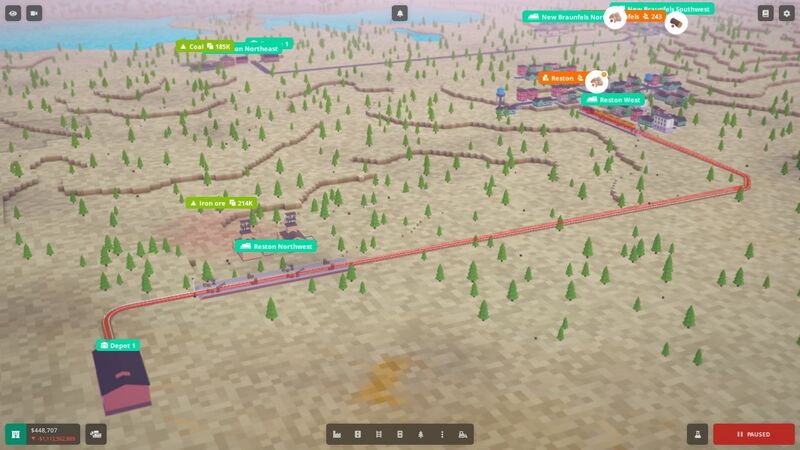 We've built our first railroad, complete with a depot, a station with a resource, a station with a buyer, and all the rail in between. However, we don't have any signals! so this is considered to be 1 block(represented by the added red line) which is no problem for our 1 train going back and forth between the two stations. But soon we will need to make a connection to the new station at the new buyer off in the distance at New Braunfels (pronounced BRAWN-felz). 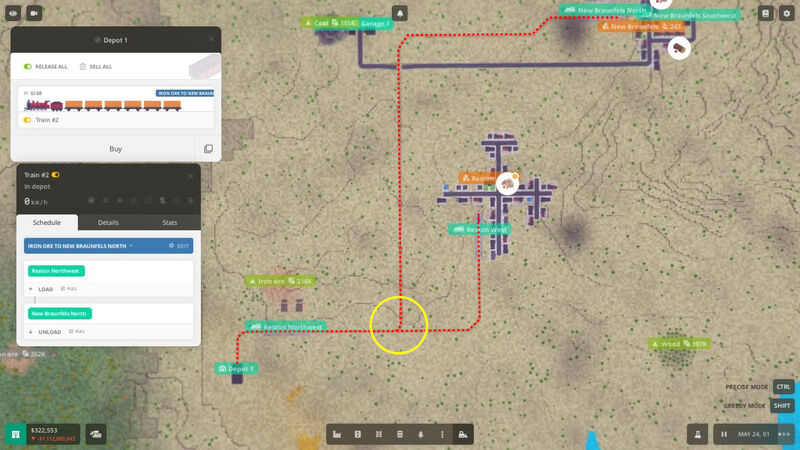 Now we've built the connecting rail to our new station, and even bought the new train and have the route set up, but the train won't even leave the depot. This is where signaling comes into to play. Since our fledgling rail network is only 1 block, the new train has nowhere to go out of the depot. We can fix this by adding some signals to the intersection circled in yellow. 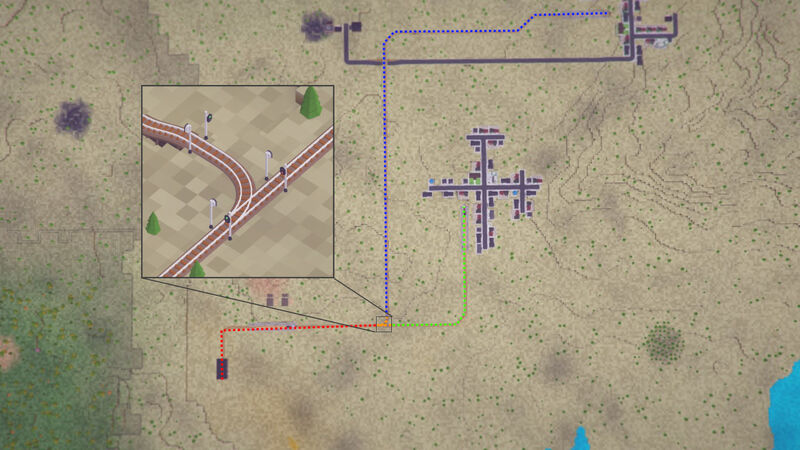 Ok, so we've added some signals to the intersection, and increased our rail network's block count to 4! This will work since we only have 2 trains and we always want more blocks than trains. Notice there are signals on both sides of the rail at each of the three branches of the intersection, this is so that the trains can move both ways on the track. We'll talk about that more later. 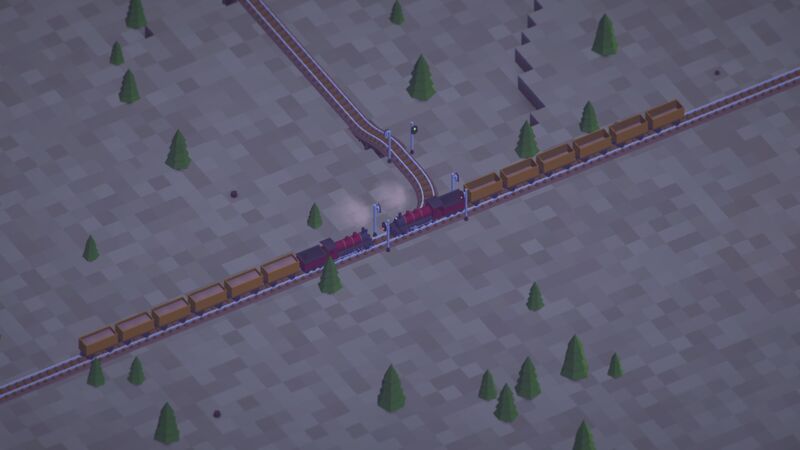 Oh no! Our signals worked for a while but at some point they got stuck, this is what is known as a deadlock. This is where pre-signals come in handy. Check out the next image to see why. 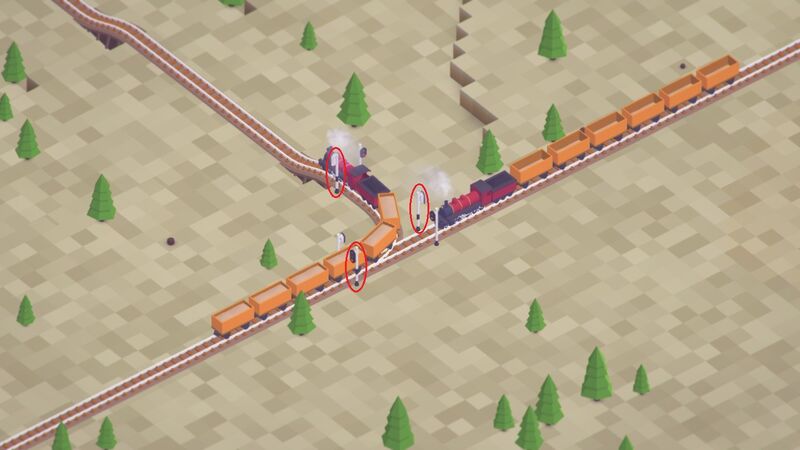 So we've replaced all the entry signals to the intersection(circled in red) with pre-signals. This helps prevent deadlocks and allows trains to pass trough because the pre-signal looks ahead to the next signal and relays that information to the train via the lights/semaphores. We'll get more in depth with that later.

Unless you want to have many separate 1-block railroads, you will be using signals a lot.

One-way rail is created by placing signals only on the right side (if you were the train on the track) of the track. One-way is used in most situations and works well using either looping tracks or best used in two- or multi- lane rail networks.

Two-way rail is created by placing signals on both sides of the track. Two-way rail is best used in early game when funds don't allow for multi-lane rail or in other niche situations. Two way rail is prone to Deadlocks unless you are meticulous about using pre-signals to signal it exactly right.

Two-Lane Rail is the simplest type of multi-lane rail. Utilizing two 1-way tracks going in opposite directions, this is the preferred method for building the majority of your rail network. It's best to leave some room, 20m(4 tiles), between the lanes for intersections.

Multi-lane rail is for when two-lane doesn't cut it. Situations where you could need multiple lanes running in the same direction include:

Intersections are when tracks cross, split, or merge. You will need proper signaling so that trains can travel through intersections successfully.

A bisection, or crossing, is a type of intersection where one track crosses another track without any way for a train to turn onto the other track.

A divergence, also known as a fork or split, is a type of intersection where one track splits into two or more tracks.

A convergence, also known as a merge, is a type of intersection where two or more tracks combine into one single track.

Complex intersections are intersections that utilize 2 or all 3 of the previous 3 intersection types. These are where deadlocks or other signaling issues are most likely to occur.

Keep in mind that only 1 train can occupy a block at any time so you always need more blocks than trains, and since ideally you want your trains to be traveling at top speed without interruption, it's best to have many free blocks for trains to travel through. This means that once you can afford it, you should be using two-lane rails that have multiple signals through the long, straight, segments. The terrain of your own game might call for some interesting solutions and that's part of the game, but don't let your rail creations turn in to spaghetti monstrosities. Simple is better but also if it works, it works.

Since pre-signals look ahead at the next signal, they can be "chained" together in succession. This can be very useful in many circumstances. The basic principle is demonstrated in the gif below.

Notice how as the train passes through the 3 pre-signals, all 3 stay red until the first normal signal turns green. Remember how signals divide tracks into blocks? How many blocks are visible in the gif?

There are 6 blocks visible in the gif by the way.

If either you keep getting deadlocks or those pesky "I'm lost" messages, you will need to troubleshoot your signaling. Check the intersection in question or if the train is lost, look at the train's route and just inspect every block along the way, the likely culprit is a missing signal on the exit or entrance of an intersection. Feel free to ask me for help with your signal troubleshooting on the discord, cileymyrus420#2231.

What? You finished the guide? What do you want a cookie or something? Go play the game!